Coulter Destroys Feinstein Over Cruz Debate On Hannity: ‘Liberal Women Should Not Be Able To Hold Office’ 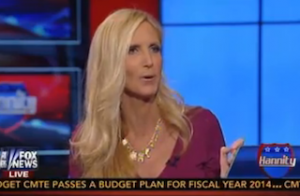 Sean Hannity invited Ann Coulter on his Thursday night Fox News show to get her take on this morning’s Senate showdown between Sen. Dianne Feinstein (D-CA) and Sen. Ted Cruz (R-TX). Coulter immediately started slamming Feinstein’s response to Cruz, in which she told the younger Senator that she’s “not sixth-grader” and didn’t need a “lecture on the Constitution.”

Comparing Feinstein to another “I am woman, hear me roar” Democrat, Hillary Clinton, Coulter said “as soon as they get a question they don’t like, they start crying.” She called Feinstein’s Constitutional arguments “preposterous” and proclaimed that Sen. Cruz “nailed her so she said ‘I’m offended.'”

Coulter argued that trying to debate gun control with Democrats is futile at this point. “I keep hearing them say we deserve to at least have a discussion,” she said. “Every time you try to have a discussion with them, they become hysterical, they cry, and want to show pictures of dead children. As if our position is we don’t mind a few dead children. Our position is ‘concealed carry’ would stop these slaughters.”

Eventually, the discussion moved beyond guns and to CPAC, with Coulter promoting her big speech to that group on Saturday immediately preceding this year’s keynote speaker: Senator Ted Cruz.