Coulter Gives GOP a Pass for Shutdown on Hannity: ‘This Is 100% the Democrats’
VIDEO

Coulter Gives GOP a Pass for Shutdown on Hannity: ‘This Is 100% the Democrats’ 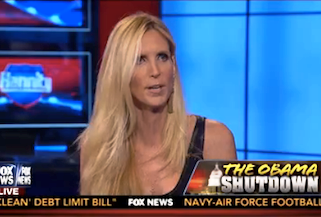 Ann Coulter joined Sean Hannity Thursday night to take on what she views as a politically-motivated government shutdown, on the part of President Obama. Lamenting the closure of the World War II memorial and other “privately-run” sights, Coulter said, “This is absolutely 100% political.”

“He’s doing this to punish people so he can blame Republicans when it is 100% the Democrats,” Coulter continued. Picking up where Hannity left off in his previous segment, she said “the entire fight has come down to” whether Democrats will agree to “live under Obamacare” like the rest of America.

Coulter explained why she was for a government shutdown to achieve this goal in 2013 when she was against it back when Newt Gingrich was leading the charge against President Bill Clinton. Most importantly, she said, conservative now own part of the media landscape.

“There was no Fox News in 1995,” she said. “Nobody was on the internet. Talk radio wasn’t as big as it is now. If you look at the polls, even with 100% of the non-Fox media pushing the idea that it’s Republicans'” fault, the gap between those who blame Democrats and those who blame Republicans is far smaller than it was in 18 years ago.

And on Republicans who Hannity described as “giving in to the bullying” of President Obama and showing signs of compromise, Coulter asked, “Were they in a coma during the launch of the Obamacare exchanges? Have they seen what’s happening?”