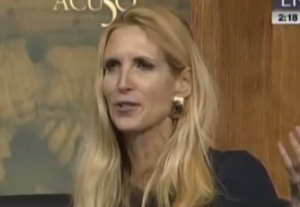 Ann Coulter appeared at CPAC today for a panel discussion, and she spent most of her time emphasizing how important the immigration issue is to the GOP and how caving on amnesty for illegal immigrants would basically be game over for the conservative cause, calling out Republican “cowardice” on the issue. She said, “I just don’t think Republicans have an obligation to forgive lawbreaking just because the Democrats need another 30 million voters.”

Moderator Jonathan Garthwaite asked, “What’s the over-under of number of years before it’s illegal to criticize a Democratic president?” Coulter predicted that the liberal fawning will calm down “once the Obama magic is gone,” and then liberals will stop being so defensive of the Democratic line all the time and “we’ll have free speech against Democrats again.”

But she kept hammering on amnesty as the big issue everyone should worry about, saying any Republicans who support it are basically telling people, “Screw the country! We want our low-wage workers!” She said she liked Mitt Romney in 2012 because he laid down the line on immigration. She compared Republican leniency on amnesty to Invasion of the Body Snatchers, remarking, “You think, oh, he’s so good on taxes, so good on national defense, wants to give the Democrats 30 million new voters.”

She did, however, acknowledge Obamacare as another important issue for the GOP to focus on, because voting for Republicans, she said, is the “only way to repeal Obamacare.”

You can watch the full panel below, via C-SPAN: