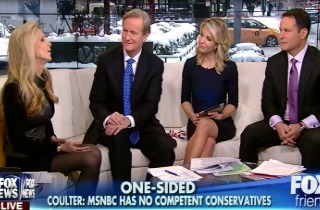 Last week, conservative columnist Ann Coulter joined Newsmax host Steve Malzberg for an interview where she was widely misconstrued as saying that Fox & Friends “will not put on conservatives who can put two sentences together.” Coulter later clarified that she was referring to MSNBC’s programs, not those of Fox News Channel. On Wednesday, she appeared on Fox & Friends to further clarify her comments and took the opportunity to swipe at MSNBC’s conservative guests.

“I was attacking myself, apparently,” Coulter remarked about the misconception. She went on to blast MSNBC hosts like Ed Schultz and Rachel Maddow, who she says refuse to debate smart conservatives.

Coulter, referring to this site and others, guessed that the misinterpretation was due to the fact that “it’s not that exciting a headline” to say that Coulter attacked MSNBC. “You know what else would make a fantastic headline? Ann Coulter kills family of five,” she suggested.

She said that MSNBC invites conservatives on like Meghan McCain to represent the other side of the debate. “It would be like Fox putting on Joe Biden’s daughter to give the other side,” Coulter added.

“They’re not insubstantial liberals,” she concluded. “It’s a real fight on Fox.”