Coulter: Obama Doesn't Want to 'Look Like An Idiot' on Syria
video

Coulter Rips Syrian Intervention: Obama Going in So He Doesn’t ‘Look Like an Idiot’ 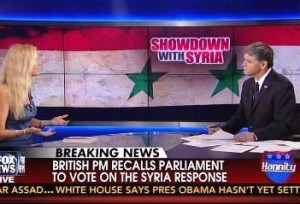 Ann Coulter joined Sean Hannity tonight to cast heavy aspersions onto the United States potentially taking military action in Syria. She repeatedly emphasized how “depressing” it is to talk about foreign policy when Democrats are president because, as she charged, they don’t really care about America’s national security interests. She also said that Obama wants to go into Syria so he doesn’t “look like an idiot.”

Coulter and Hannity briefly clashed over whether Obama can bomb another country without consulting Congress (Coulter said he could). She charged that Democratic presidents intervene when it happens to be “contrary” to the nation’s interests, and then claimed that Syrian intervention is happening “solely so that our president wouldn’t look like an idiot for something he said,” referencing Obama’s “red line” threat regarding Syria’s potential use of chemical weapons.

RELATED: ‘Our Enemies Are Killing Each Other’: Fox Military Analysts Battle O’Reilly Over Syria

In the second half of the interview, Coulter brought up Bosnian intervention under Clinton, saying the body count was exaggerated by the administration. She also said at the time they actually touted how the intervention had nothing to do with America’s national security interests. Coulter questioned Obama’s increased involvement in Afghanistan, charging it’s only happening “because of a line he used on the campaign trail.”

Hannity brought up Obama’s past statements condemning presidents unilaterally taking military action without consulting Congress. Coulter predicted that when the Syrian bombing likely happens, “it won’t develop into a huge conflagration.” And in case the audience missed the message the first few times, she looked into the camera and declared, “Do not vote for Democrats for Commander-in-Chief, America! This is what happens!”