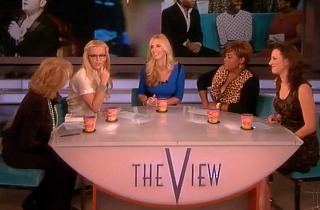 Conservative author Ann Coulter appeared on ABC’s The View on Tuesday to promote her new book, Never Trust a Liberal Over Three — Especially a Republican. She shocked the hosts after she shot down their claim that the government shutdown would have never occurred if the federal government was run by women. Coulter countered by saying that “bitchy” and “hysteria” are two words associated with women for a reason.

“You’ve never met a liberal you liked?” Barbara Walters asked about her book. Coulter said that the headline for her book was not literally true, but it was a take off on a 1960s-era expression which advised young people to not trust adults.

“A lot of the Republicans are being blamed for this 16-day government shutdown,” Sherri Shepherd began. “What’s you’re take on that.”

“My gripe is with Republicans doing too much of the circular firing squad,” Coulter replied. “I have an idea: why don’t you attack Democrats.”

RELATED: Ann Coulter Talks to Mediaite About Issuing a ‘Fatwa’ for Conservatives, and Why She Mostly Watches MSNBC

Guest host Alicia Menendez asked Coulter about the polling which showed Republicans are now deeply unpopular with the general public. Coulter dismissed those polls of only adults. She said that they were as relevant as her opinion on Dancing with the Stars – a program she does not watch.

“Half of all adults don’t know what day Election Day is,” she said. “For people paying attention, [Sens.] Ted Cruz (R-TX) and Mike Lee (R-UT) are probably the two smartest senators.”

Jenny McCarthy asked Coulter about the consensus on The View panel, that there would not have been a shutdown if “a woman ran the country.” Coulter blasted this notion as having a faulty premise.

“I think there’s a reason why the words ‘bitchy,’ and ‘hysteria’ come from females,” She said to the groans of The View’s hosts.

Turning to 2016, the panel guests asked what Coulter thought of former Sec. Hillary Clinton’s prospects. Coulter said that her nomination, let alone election, is not assured.

“After, sorry to get very New York-centric, after this mayoral election, I was told it was going to be Christine Quinn,” she said. “And then, people vote…”

When asked about New Jersey Gov. Chris Christie, Coulter said that he has fallen out of her favor.

“He had his temporary Senate appointee vote for amnesty, which is the Republican suicide bill,” coulter said. “Our immigration policy should be like other countries where we try to get the best immigrants in the world and not just lives within walking distance.”