Ann Coulter To Hannity: People Should Look At Wall Street Protesters With ‘Hilarity And Revulsion’ 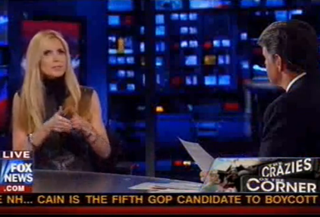 Ann Coulter is no fan of Occupy Wall Street, and she has been vocal about her opposition. On Hannity last night, she reiterated the thesis of her latest book, Demonic, in which she called left-wing mobs violent and evil by nature, noted the Occupy Wall Street rallies fit the bill perfectly, and assured America that the students protesting there are only from “bush-league schools… none of these kids are coming from places like Yale.”

Coulter seemed in some ways appreciative of Occupy Wall Street, as they, to her, perfectly epitomized the thesis of her book. “They themselves are quoting the first scene in my book from the Bible,” she told Sean Hannity. With a lower third under her blaring “The Crazies on the Corner” (seriously, whoever does the chyrons for Hannity deserves a Pulitzer), Coulter expressed some misgivings about the way Mayor Michael Bloomberg was treating the protesters, but was confident that most of the nation did not pay them much heed. “Americans are reacting the way they should,” she declared, “which is with hilarity and revulsion.”

She also went on to describe the protesters as “drug dealers, criminals, teenage runaways,” as well as “the young Spartacus leads,” people who feel the need to revolt for its own sake. She assured Hannity that this was a minority of the population and the movement hadn’t permeated any elites, noting that on her recent visit to Yale, she found that anyone she asked about attending the protests “reacted with absolute contempt.” “None of these kids at Occupy Wall Street,” she argued, “are coming from places like Yale.”