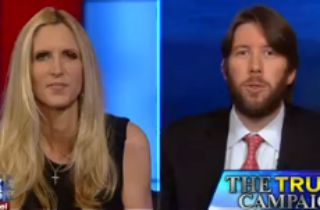 Ann Coulter and National Review writer Charles Cooke appeared on Hannity tonight to address Donald Trump‘s recent statements regarding his proposed wall across the Mexican border. The discussion soon led to a debate between Coulter and Cooke about whether Trump has ever been caught in a flip-flop.

Coulter responded by saying that Charles was exaggerating Trump’s changes on issues over the years, saying he has been consistent on issues like immigration that matter most to him.

“I don’t think voters go out and think, ‘well, he’s been consistent for 20 years on this.’ “He has certainly been consistent about caring about illegal immigration,” Coulter said. “He has long before now. It isn’t a flip-flop on Planned Parenthood. He is not a politician, he is not familiar with all the deceptive ways Planned Parenthood will sneak through funding for abortion.”

Cooke responded by saying that Trump has flip-flopped on taxes within the same day, and continued to bring up Trump’s past liberal positions. Coulter emphasized that Trump was merely making a point about other issues, that he changed over time, and that other Republicans had far more egregious flip-flops on immigration and amnesty, than Trump has had.

When Cooke said that Trump had only recently decided to act like a conservative, Coulter insisted that he has been one since 1988.

“He was at the Republican National Convention talking like a conservative,” said Coulter. “You’re catching him on these teeny-tiny little developments on a position.”