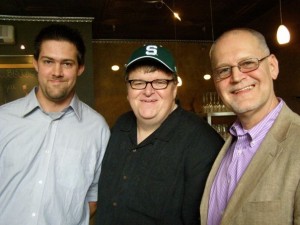 In what could have been called “Wendell Potter and the Death Panel Hallows,” Countdown’s Keith Olbermann arranged a first-time introduction between health insurance whistleblower Wendell Potter and Sicko director Michael Moore. The subject was Potter’s participation in an industry effort to discredit Moore’s universal healthcare opus, and while the exchange promised to be riveting, the result was rivetingly awkward.

The most fascinating aspect of this is that Moore has met Potter before, but not Courageous Whistleblower Potter. The photo above was taken at the premiere of Sicko, when Potter’s son asked his dad if he could meet his new “hero.” In their Countdown interview, Potter tells Michael Moore that he knew, even then, that what he was doing was wrong, but carried on with it anyway. If you look closely at the picture, you can almost see Potter twisting the knife back there.

Moore immediately lets Potter off the hook, accepting his apology, which sets up a weird dynamic in which the filmmaker calls Potter a hero, but also asks how did it feel to sell his soul in full view of his son. They also spend a lot of time describing the populist Sicko uprising that the insurance industry feared, a notion that might seem self-aggrandizing until you recall what a Rick Santelli rant and some astroturf seed money have wrought.

Adding to the weirdness quotient, Olbermann just shrinks back into a corner to watch the stilted fireworks, emerging only to comically battle Moore for a commercial break.

Here’s the segment, in two parts: (from MSNBC)

The Potter/Moore segment is hampered by the fact that Moore, meeting whistleblower Potter for the first time, seems anxious to let him know that all is forgiven. As this CNN segment attests, a pissed-off Michael Moore is much more engaging. Wolf Blitzer plays a “fact-check” segment that includes Potter’s industry shills (and their “fast and loose” script), and Moore gives him a blistering earful:

Michael Moore went on to debate Dr. Sanjay Gupta (in 3 parts, here, here, and here), tearing him a new Situation Room over sins far less egregious than Potter’s. Given the importance he assigns to the health insurance industry’s effort, Moore is far too quick to grant Potter absolution.