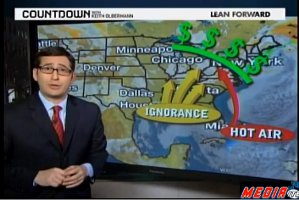 Countdown guest host Sam Seder tonight tackled global warming, an issue that predictably popped back up into the national consciousness in the wake of this weekend’s blizzard in the Northeast U.S. Seder, also predictably, viewed attacks on global warming science as faulty, and brought on conservation biologist Reese Halter to make this point – but not before providing a…unique explanation himself.

Seder’s explanation centered around a “weather report” from Countdown’s meteorologist…who also, conveniently, happened to be Sam Seder. Seder discussed the patterns that, in his mind, combined to form global warming denial: “a high pressure system…from the energy-producing states” mixed with “a strong front of ignorance sweeping up from down South” and “current of blustery hot air out of just one radio studio in Palm Beach, Florida.” It was a cute conceit and everything, but he probably could have done without the southern stereotyping.

Then, he brought out Halter, who had a more scientific explanation for why, say, a massive blizzard may be a possible byproduct of global warming:

“Imagine going into your kitchen, walking up to your refrigerator, opening up the freezer, leaving the door open. The motor would ramp up, get warm – as the Arctic has – and the cold air would continue to spill out, eventually cooling our kitchen. That’s what’s happening. Couple that with a high-pressure system in the mid-latitudes pulling that icy cold polar air all the way down to Miami, mix it with the precipitation from the Atlantic, and voila – we’ve got our storms in NYC.”

While neither explanation is likely to resonate with those who believe global warming is a fraud, both Seder and Halter did find colorful ways to make their respective points, which there’s something to be said for regardless of one’s stance. Video of the clip, via MSNBC, below.