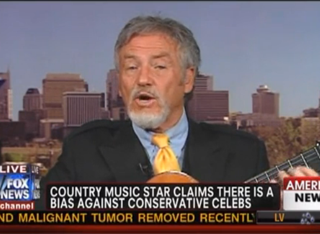 Country legend Larry Gatlin is both a celebrity and a conservative, and he is tired of the condescension he has experienced from the media when expressing himself politically. Gatlin and his guitar went on Fox News today to make the case for those “west of the Potomac” getting treated better in political discussions, and for “bordellos” over “Congress.”

Anchor Uma Pemmaraju asked Gatlin to explain how he perceived the bias, and he explained his experience on another network when he was asked to sing at President George W. Bush‘s inaugural. Noting that they asking him whether he voted for the President “because you’ve known him for 40 years,” Gatlin noted that he answered “Well, I’ve know Willie Nelson for 40 years and he’s a good friend of mine but I’m not going to vote for him for President!” “A lot of us west of the Potomac have indoor plumbing and electricity and we can read, write, and trace if we have to
but in a totally condescending tone to me,” he noted, he was treated because of who he was and where he was from. Gatlin also noted that he wasn’t just a celebrity, but a “policy wonk” and a “political science major.”

That said, Gatlin noted that “the people who pay for our concerts are not there for the politics,” and he doesn’t thrust it upon them.” Instead, he gave a taste of what he actually played in concerts with his guitar, a song with the lyrics “Don’t tell my mother than I’m in the Congress… my saintly mother thinks I play piano in a bordello in New Orleans.”