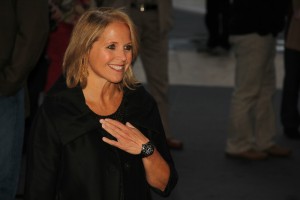 In a statement issued Sunday, Yahoo News anchor and executive producer of the documentary Under the Gun Katie Couric apologized for a “misleading” edit that appeared in that film.

Couric asked a pro-gun rights Virginia group how guns could be kept out of the hands of felons and terrorists without background checks. In the edited version seen in the film, the group does not answer for several seconds and stares at their knees. But when the gun group in question released their own recording, they showed that they were not dumbstruck and immediately gave lucid answers.

The first hint of an apology came the Thursday after the discrepancy was pointed out, when an unnamed individual close to Couric told The Wrap that she was “upset” with the edit. But days later, Couric herself came out and offered an explanation.

“When I screened an early version of the film with the director, Stephanie Soechtig, I questioned her and the editor about the pause and was told that a ‘beat’ was added for, as she described it, ‘dramatic effect,’ to give the audience a moment to consider the question. When VCDL members recently pointed out that they had in fact immediately answered this question, I went back and reviewed it and agree that those eight seconds do not accurately represent their response,” she said in a statement posted to the Under the Gun website.

“As Executive Producer of Under the Gun, a documentary film that explores the epidemic of gun violence, I take responsibility for a decision that misrepresented an exchange I had with members of the Virginia Citizens Defense League (VCDL)…” she writes. “I regret that those eight seconds were misleading and that I did not raise my initial concerns more vigorously.”