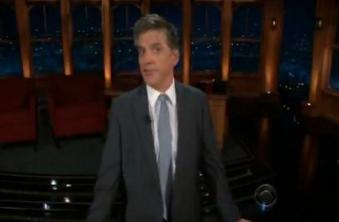 While his boss was spending his show last night joking, and apologizing, about his extortion/sex scandal, Craig Ferguson got the chance to weigh in for the first time on the issue.

Like his Worldwide Pants Incorporated boss David Letterman, Ferguson’s Late, Late Show doesn’t tape on Fridays, so in his first opportunity to address (or not) the scandal, he took a funny, purposely awkward approach that teased the potential for more down the road.

“The person you admire and respect is caught in an embarrassing situation. And your job is to be funny about that – whilst trying to keep your own job.”

As Ferguson slowly strolled into frame, avoiding eye contact for effect, the audience started laughing and cheering. “I guess by now you’ve all figured out how I got the job,” he said.

He explained the conundrum like this: “The person you admire and respect is caught in an embarrassing situation. And your job is to be funny about that – whilst trying to keep your own job.”

Throughout the entire, fairly short, opening monologue, he managed to be funny and address the story while avoiding passing judgment. Ferguson has had a long history with some tabloid-like issues himself, but he has always been very public about his past on his show, and most recently in his new book released last month. “If we are now holding late night talk show hosts to the same moral accountability as we hold politicians or clergyman, I’m out,” he said emphatically.

He continued the theme of a tacit defense of Letterman, as he described his preference for his entertainers to be “dangerous.” But that didn’t stop him from concluding he would be only doing his job if he were to poke fun at the situation. He closed with this:

Let me just say this. I have enjoyed working here. And I’m going to do my darnedest to stay here. But if I inadvertently say something which gets me fired, then I hope it was funny.

We’ll see if Ferguson goes back to the well for more – in the very next segment he putting in joking asides about the case again. As an employee, as well as an entertainer (and one whose popularity is on the rise), it will be fine line to walk.

One other joke from earlier in the monologue: Describing Letterman as the “king of late night television,” Ferguson said, “Unless you believe the NBC press release.”