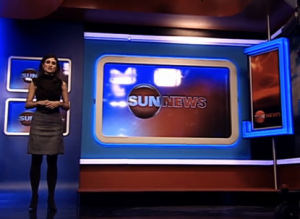 Canada’s newest cable news network, Sun News, launched on Monday as a sort of “Fox News North,” as the Hollywood Reporter has described it. Described in on-air promos as a “hard news and straight talk” network, Sun News is getting plenty of comparisons to Fox News, with a business model based on providing an alternative to the “left-leaning all news channels CTV and CBC.”

Reviewers, though, say the network may be bold, but its ratings haven’t had anywhere near Fox News success:

“Well, Nervous Nellies on the left can exhale,” Carleton University journalism professor Jeff Sallot wrote in the Ottawa Citizen “The Sun News Network, for the moment at least, is irrelevant to any political calculation. How can I tell? The Conservatives, who are running the most efficient campaign among the four national parties, are ignoring the little network.”

What is getting attention is the, um, look of its presenters. And no, not the handlebar mustache that one male anchor is rocking. THR says it’s more about the women:

“… Sun TV really isn’t about Hard News and Straight Talk. It’s about Hot Chicks and Sexy Outfits,” declared red-faced columnist Tasha Kheiriddin in the right-leaning National Post newspaper. “For its women presenters, there seems to be a ban on sleeves. Not a jacket in sight. Only cocktail dresses, as clingy and low-cut as possible.”

Writing in the National Post, Scott Stinson urged viewers to give Sun a chance to get past its launch, which he says was way more about self-promotion than news:

If you had the foresight to play a drinking game that involved taking a shot every time someone on Sun News Network uttered a cliché on air in the moments after it launched, you are probably still stone drunk right now.

The much-anticipated debut broadcast from Canada’s latest all-news network began late Monday afternoon with what amounted to a half-hour infomercial for its programming lineup and roster of talent. The hosts and reporters all explained what they would be doing at Sun News. Bromides were involved. There would “be no sacred cows.” They are “raising the bar.” It’s “not going to be politics as usual.” And, most importantly, they “are going to cover the stories that matter.” The stories that “people really want to hear about.”