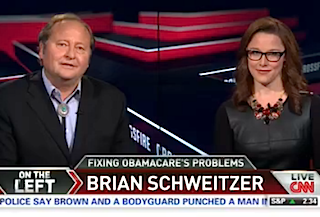 Former Montana governor Brian Schweitzer appeared a guest host “from the left” for the second time on Monday night’s Crossfire, livening up the CNN reboot with an impassioned defense of the Affordable Care Act in counterpoint to regular host S.E. Cupp. But while he may be a natural on cable news, Schweitzer has no plans to venture beyond CNN.

On his plans to appear as a guest host on Crossfire four times over the next month, Schweitzer told his local Billings Gazette, “I don’t aspire to be on Fox or MSNBC. They’re hair on fire. You’re always wrong. You’re always right. At CNN, they want to have a longer form discussion so it’s not just talking points. Bring in political and business leaders and you get to drill down.”

The enhanced exposure Crossfire will bring to the former governor has raised suspicions that he is gearing up for a presidential run in 2016. “As I’ve said before, I’m still a citizen of the United States, and I still qualify because I’m the correct age,” he told the paper. “That being said, if you’d be sitting where I am, looking out over Georgetown Lake, which is completely calm and with a perfect reflection of the snow-capped Pintler peaks, you’d be asking, ‘Has someone got a better life than that?’”

Instead, he indicated that his Crossfire appearances are about nothing more than sharing his political opinions with the country. “It gives me an opportunity to be in the body politic and gives me a voice in a way that would be superior to a freshman member of Congress or, for that matter, a long-shot (presidential) candidate in Iowa,” he said.

Watch Schweitzer in action on last night’s Crossfire below, via CNN: