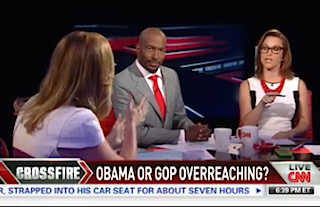 Yet another host–only episode of CNN’s Crossfire heated up on Thursday when Stephanie Cutter and S.E. Cupp went head-to-head in an argument over which party is more responsible of obstructing progress in Washington. Is it Republicans who refuse to work with the president or the other way around?

With House Speaker John Boehner (R-OH) planning a lawsuit against President Barack Obama’s executive actions and Sen. Ted Cruz (R-TX) calling for the impeachment of Attorney General Eric Holder, Cutter suggested that Republicans should be “getting real things done that the American people care about.”

“Why do senators and congressmen even both showing up?” Cupp asked in response. “The president said he doesn’t need them, they’re irrelevant.”

“Because they don’t do anything,” Cutter shot back. “If they showed up and voted… You know who wanted a vote on immigration? Democrats. You know who won’t bring immigration to the House floor? John Boehner.”

To this, Cutter responded, “I think every one of the Democrats you pointed out understand that the president would like to work with them on important issues of the day but Republicans are obstructing any progress.”