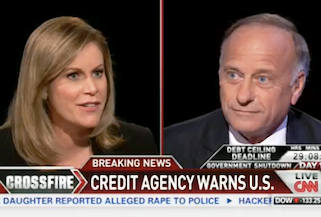 Rep. Steve King (R-IA) found himself stuck between host Stephanie Cutter and his colleage, Rep. Donna Edwards (D-MD) during a heated Crossfire debate over the budget and debt ceiling battles waging in Congress. Cutter challenged King to answer for the “hard-liners” in the House who appear unwilling to reopen the government and raise the debt ceiling. “We’re more than two weeks into this,” Cutter said, “have you learned nothing?”

King railed against Cutter and Edwards, rejecting their “premise” that Congress “has a duty and obligation” to fund everything the government and raise the debt ceiling. “If you go on like that and you have the most leftist president we ever had in history, and we see trillion deficits as far as the eye can see,” King said, “at what point then do we look back in history and say those guys and gals failed us? They should have held the line. They should have been willing to face the president shutting the government down. And they should have made an issue about the debt ceiling so that we can reform entitlements.”

Cutter shot back that most Congresses have tackled these issues by “working through a budget process” and “passing legislation to reduce spending.” Calling King a “hard-liner,” something she insisted she didn’t mean as an “insult” (and King likely didn’t take that way), Cutter called the congressman out for attending a “secret dinner” with Sen. Ted Cruz (R-TX) last night to plot a strategy to keep the government closed. “Have you learned nothing?” she asked. “What have you gained?”

King avoided answering those questions specifically and instead offered his plan to wait until the 2014 midterm elections to “decide whether we really want Obamacare or not.”