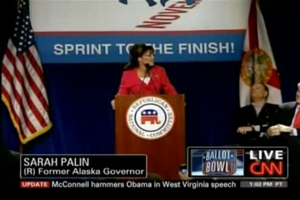 Sarah Palin is a trendsetter, and she’s going to make this George W. Bush character popular on the campaign trail no matter what challenges stand before her. Yes, Palin invoked he-who-shall-not-be-named at a campaign event earlier today to get Republicans and independents fired up about foreign policy, fiscal responsibility, and “good ol’ Reaganism.” Too soon?

Palin was in Florida with RNC Chairman Michael Steele to energize voters and supporters to get out the vote and get involved in the few days leading up to the midterm elections in early November. She began first and foremost by plugging her new program, Sarah Palin’s Alaska, and, because no Palin gets left behind, left time for a Dancing with the Stars joke later on. She then got into the heart of the matter, and warned the crowd, to cheers, that they would be hearing Ronald Reagan‘s name come up a lot in her speech, and not so much “Alinsky or Ayers or Mao.” She riled up the crowd sticking to the values she talks about best, and most generally: fiscal responsibility, individual freedom, “restoring our country.”

Then her speech took an unexpected detour back to 2003 as she praised Florida “native son” Jeb Bush and his presidential brother. One would have to research it, but this has to be one of the first times a nationally-recognized political personality brings up President Bush positively and receives cheers– not just because of the visceral disgust with Bush typical on the left, but because the garden-variety Tea Partier on the right has accepted that a major contributing factor to the current economic crisis was the overspending during the Bush years. Even more shocking than their cheering of President Bush was that of his specific policies– “the national security policy of ‘we win and you lose,'” as Palin put it. You’ve got to hand it to her: cheering on Bush foreign policy the day after the massive Wikileaks document dump on the Iraq War is a risky move, and, judging from the crowd, she pulled it off.

Watch the first part of Palin’s speech via CNN below: