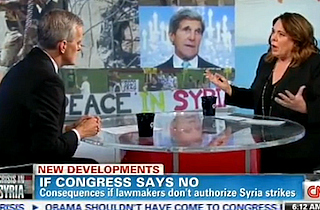 State of the Union host Candy Crowley pressed White House Chief of Staff Denis McDonough over the Obama administration’s argument that striking Syria would send a message to Iran about aggression in the region, noting that the Iraq War did not have a deterrent effect upon the country.

“I am confused by this idea that somehow the U.S. backing up words with a missile strike into Syria sends a message to Iran,” Crowley said. “We went to Iraq with more than 100,000 troops. We took out a leader. It didn’t affect their behavior at all. Why would a missile strike in Syria do so?”

“Let’s remember the Iranians have a particular history with chemical weapons,” McDonough said. “The receiver, by the way, of attacks of chemical weapons, not the sender. So they are very focused on what’s happening in Syria. We have plenty of reason to believe that they are very uncomfortable with what their ally chose to do here.”

“As importantly,” McDonough continued, “when we lay down, and the international community lays down a red line, as we have now seven times in Security Council Resolutions against the Iranians, saying they cannot develop nuclear weapons, and they continue to do it, we have to make sure they don’t misinterpret where the west is, and misinterpret how we react to Syria, to suggest that they have greater operating space or more wiggle room as it relates to its nuclear program.”

“They didn’t seem deterred when we went into Iraq,” Crowley replied.