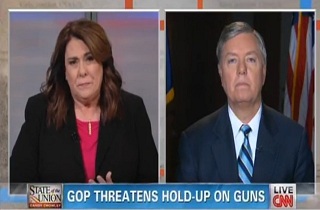 Senator Lindsey Graham was emphatic on CNN’s State of The Union this morning that he would not filibuster a gun control bill. Graham told CNN’s Candy Crowley that he doesn’t think any gun legislation that expands background checks will get out of the Senate.

Crowley asked Graham about a letter Senators Ted Cruz, Rand Paul, and Mike Lee sent to Senator Harry Reid where they declared that they would filibuster any legislation that would “infringe on the American people’s constitutional rights to bear arms or on their ability to exercise this right without being subject to government surveillance.”

Graham was clear he would not join them.

“The only way I would filibuster a bill is if Senator Reid did not allow alternative amendments,” said Graham, adding that he has his own legislation on background checks.

Crowley asked Graham about polls that continue to show that an overwhelming majority of Americans want so-called universal background checks to be implemented. Graham said any kind of legislation that intends to expand background checks would not survive.

“This idea of private individuals transferring their weapons and having to go through a background check makes no sense,” Graham said.

Graham thinks the current background check has problems and needs to be improved before it is expanded. The bill, in Graham’s eyes, would require a father to run a background check on his son if he wants to hand-down a gun to him.

“The current system is broken. Fix the current system. Don’t expand it to individual transfers. Nothing we’re talking about would not have prevented Newtown from happening. The guy did not fail a background check,” Graham said.

Watch clip below via CNN.