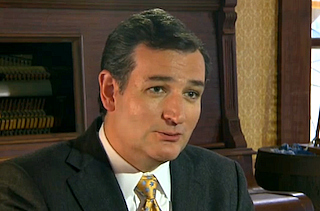 Senator Ted Cruz (R-TX) defended his recent attempted block of a cloture vote on the debt ceiling to CNN’s Dana Bash Thursday morning. Cruz’s maneuver forced several of his fellow GOP lawmakers to take “tough votes” to bring the bill to the floor, reviving anger from last October’s Cruz-induced government shutdown that cost the GOP in the polls.

Cruz accused his Republican colleagues of “trickery” in trying to raise the debt ceiling while keeping GOP fingerprints off of it.

“Republican leadership said, ‘We want this to pass, but if every senator affirmatively consents to doing it on fifty-one votes, then we can all cast a vote ‘no’ and we can go home to our constituents and say we opposed it,'” he said. “And listen, that sort of show vote, that sort of trickery to the constituents is why Congress has a thirteen percent approval rating.”

Bash asked Cruz was indicting John Cornyn (R-TX), the senior senator from Texas, in that statement, but Cruz demurred. He also denied he was throwing Republicans under the bus.