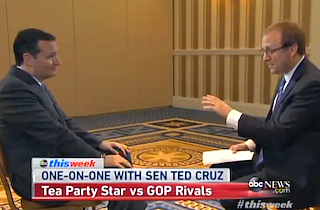 Senator Ted Cruz (R-TX) went after fellow Republican Senator Rand Paul (R-KY) and President Barack Obama on This Week With George Stephanopoulos sunday morning, telling ABC’s Jonathan Karl that Obama’s “five years of weakness” had emboldened Putin and that the U.S. needed to defend its values across the globe, in contrast to Paul’s less-interventionist foreign policy.

“I’m a big fan of Rand Paul,” Cruz said, “but I don’t agree with him on foreign policy. I think U.S. leadership is critical in the world. I agree with him that we should be very reluctant to deploy military force abroad. But I think there is a vital role, just as Ronald Reagan did. When Ronald Reagan called the Soviet Union an evil empire, when he stood in front of the Brandenburg Gate and said, ‘Mr. Gorbachev, tear down this wall,’ those words changed the course of history. The United States has a responsibility to defend our values.”

Cruz also tied the situation in Crimea to Benghazi, as Senator Lindsey Graham (R-SC) did earlier this week.

“A critical reason or Putin’s aggression has been President Obama’s weakness,” Cruz said. “Their policy has been to alienate and abandon our friends and coddle and appease our enemies. So you better believe that Putin sees in Benghazi, four Americans are murdered, and nothing happens, there’s no retribution. You better believe that Putin sees that in Syria, Obama draws a red line and ignores the red line.”

“Putin is a KGB thug,” Cruz said. “When the protests began in the Ukraine, the president should have stood unapologetically, emphatically for freedom. When the United States doesn’t stand for freedom, tyrants notice.”