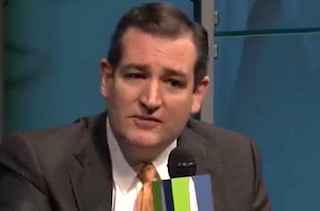 Fox News host Chris Wallace interviewed Senator Ted Cruz (R-TX) at The Atlantic‘s Washington Ideas Forum on Thursday, and the senator gave the crowd a laugh when he claimed he never wanted a government shutdown.

“That ignores who I think was responsible for the shutdown,” Cruz said. “I didn’t want a shutdown. Throughout the whole thing, I said we shouldn’t have a shutdown.”

The crowd made their opinion of this statement clear.

“Now, folks here can disagree,” Cruz said to the audience. “But repeatedly, I voted to keep the government open.”

Cruz was widely credited as the strategist behind the shutdown, which earned him the enmity of GOP colleagues when the tactic cost Republicans in the polls.

Later in the interview, Wallace pressed Cruz on his presidential ambitions, asking if Cruz ever saw himself as the type of leader he’d vote for.

“I intend to support whoever is standing up and leading,” Cruz said. “Whoever is effectively defending conservative principles, defending free market principles, defending the Constitution, bringing us back to defending liberty. That’s who as a voter I intend to support. And it’s my hope that we see a thousand flowers bloom, that we see lots of people stepping up providing that leadership because that’s what it’s going to take to turn the country around.”

Watch the video below, via Raw Story: