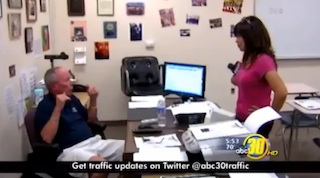 At first glance, the story looks like just another situation where a teacher is trying to take religion out of the country’s schools. However, the story of the California teacher who banned the saying of “bless you” after someone sneezes is actually much odder. It turns out that Steve Cuckovich’s reasoning really has nothing to do with religion in the typical “War on Christianity”/rile up the Fox News anchors kind of way. No, he just thinks the saying is outdated.

Here’s what he told California’s KFSN:

“Cuckovich says the policy has nothing to do with religion, but says the phrase is just a outdated practice and disrupts class time.

‘When you sneezed in the old days, they thought you were dispelling evil spirits out of your body,’ Cuckovich said. ‘So they were saying, ‘god bless you’ for getting rid of evil spirits. But today, I said what you’re doing doesn’t really make any sense anymore.'”

Cuckovich even went so far as to take points off kids’ grades when they said it. Unsurprisingly, this didn’t sit well with the students and their parents and Cuckovich has been forced to lift the policy.

I’m kind of torn on this. It seems pretty ridiculous to hurt a kid’s grade just because he’s subscribing to society’s set manners, however, this guy does teach high school health. As long as the kids aren’t literally drunk driving through the classroom while having unprotected sex on their desk, it’s kind of hard to find anything else to penalize them for.

Seriously though, this guy’s gonna be in big trouble when they get to the end of the school year and find out that everyone’s noses are now chock full of evil spirits.

Watch the report from KFSN below: