Cuomo Interview with RT Anchor Explodes: ‘You’re Supposed to Be a Journalist!’
VIDEO

Cuomo Interview with RT Anchor Explodes: ‘You’re Supposed to Be a Journalist!’ 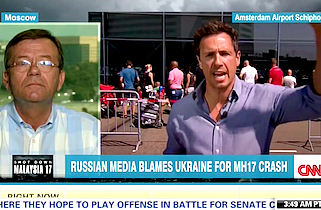 CNN New Day host Chris Cuomo, who’s been reporting from Ukraine this week, got into an explosive dozen-minute shouting match with RT anchor Peter Lavelle Wednesday morning, as the two men largely yelled past each other over Russia’s culpability in the downing of flight MH17 and the evidence since offered by western powers.

Cuomo asked Lavelle why Putin had allowed the crime scene to so deteriorate, while Lavelle argued that Putin had no control over a foreign country’s territory. The two fought over the existence of the west’s evidence that Moscow-backed Ukrainian separatists fired the missile that took down the plane, with Lavelle claiming it came from “Twitter.”

“The U.S. government condemned Russia before the bodies were even off the ground,” Lavelle said. “What kind of logic is that?… U.S intelligence has no idea what it’s talking about. Or it knows what happens and it doesn’t want the world to find out what really happened.”

Lavelle’s thoughts were not entirely different from what CNN heard from its own foreign correspondent Diana Magnay yesterday; on the other hand, RT just lost one of its foreign correspondents, Sara Firth, who loudly accused the network of submitting to Putin’s agenda on the way out.

From there the interview quickly escalated into accusations of water-carrying and stupidity, as Cuomo accused Lavelle of dodging his queries to protect Russia and Lavelle accused Cuomo of asking loaded questions intended to assign blame ahead of facts.

“Here’s the difference between you and me, Peter. You are obsessed with clearing Russia from culpability,” Cuomo said, going on to say he “seemed to be acting like a representative of Russia.” “Why should you carry water for Russia when you’re supposed to be a journalist?”

“You carry water for the U.S. State Department,” Lavelle said, calling Cuomo’s questions stupid and added that western journalists were “denying the agency of people in eastern Ukraine. You just think they’re puppets of Russia. That’s simply not true.”

“You have to live with what you do for a living,” Cuomo said in closing.