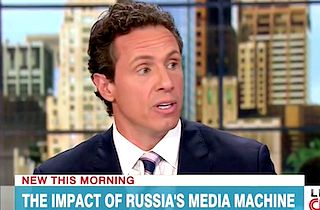 Back in the studio, New Day’s Chris Cuomo recounted the contentious interview he conducted with Russia Today anchor Peter Lavelle yesterday, in which the two traded accusations of water carrying and so forth. Cuomo said that the significant satellite delay prevented him from cutting off Lavelle’s evasions, but added that Russia and its various media outlets had been very effective at countering the west’s evidence with “misinformation.”

“He was actually getting away with a benefit that won’t mean as much to you at home as people who understand the business, but the satellite delay was killing me, because there was a big delay so I wasn’t able to cut off what I would have done in person,” Cuomo said. right. “If we had been in person I would have said, ‘Look, I am not here to make the U.S. case against Russia. I’m here to ask you certain questions because you have been out there saying you have the answers.'”

“That said, there’s two layers of it,” Cuomo continued. “One is: what’s your role as a journalist, and how much do you debate and how much do you own a position? And two is: who is being more effective? For all the talk about propaganda, which by definition is misinformation, I would say Russia’s winning.”

Cuomo cited the effectiveness of Russia’s counter-speculation, which rested on the evidence of absence — i.e., can you ever prove a Ukrainian fighter jet wasn’t in the area, etc.