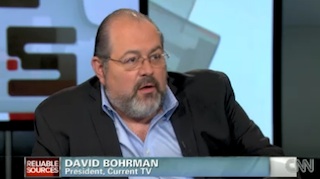 Yesterday, David Bohrman stopped by his old CNN stomping grounds, appearing on Reliable Sources where Howard Kurtz introduced him as the guy who helped bring us the 2008 election hologram (either a nice compliment or horrible insult depending on your view of that “innovation”). While there, he had a fascinating discussion about his new job, president of Current TV. Borhman discussed “outing” himself as a liberal, the differences between his network and MSNBC, and its relationship with Fox News.

Kurtz brought up that some may worry, now that he’s in charge of a liberal network, that his personal politics may have swayed some decisions during his time residing over CNN. Bohrman promised that that was not the case, saying that, in all the years he worked with personalities like Wolf Blitzer and John King, he never knew how they voted and he was sure the same went the other way around. He also pointed out that he had produced the specials on the funerals for Richard Nixon and Ronald Reagan and that they had been some of the most respectful events on air.

Things will be different, however, at Current. He said the network will wear its liberalism on its sleeve, not hiding behind any “progressive” descriptor and that, unlike other networks, there will be no attempt to create some kind of equivalency between viewpoints, contrasting it to the old Crossfire structure where the conversation was contorted to give equal air time to every opinion no matter what. There would be conservative pundits, but the debates would be lengthy and organic.

He pointed out that there seemed to be plenty of conservative viewpoints discussed in talk radio and elsewhere. Kurtz exclaimed that he sounded exactly the way the Fox News people did when they first started.

“In an odd way, I think that, what Roger Ailes started to do 15 years ago when he started Fox News, he wanted to barge into a media environment he saw as liberal and, remember, he talked about ‘We report, you decide.’ Well, I think that Fox is now the mainstream. Fox tells a lot of people waht to think, and I think we, want to, on one level, to be a counterpoint to that.”

It’s clear to me that, if you really want to make a network that’s different than all the rest, start out by talking about how mainstream yours is. “Mainstream News, news for people that don’t run around feeling like alienated victims all the time.”

Watch the clip from CNN below