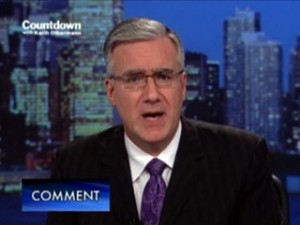 News broke Friday afternoon that Current TV has terminated its contract with Keith Olbermann. Starting tonight, Olbermann will be replaced by Viewpoint with Eliot Spitzer.

Olbermann had been with Current for just over a year, following his departure from MSNBC. Citing “the values of respect, openness, collegiality,” an open letter from Current stated that those values are no longer reflected in their relationship with Olbermann.

OPEN LETTER TO THE VIEWERS OF CURRENT

To the Viewers of Current:

We created Current to give voice to those Americans who refuse to rely on corporate-controlled media and are seeking an authentic progressive outlet. We are more committed to those goals today than ever before.

Current was also founded on the values of respect, openness, collegiality, and loyalty to our viewers. Unfortunately these values are no longer reflected in our relationship with Keith Olbermann and we have ended it.

We are moving ahead by honoring Current’s values. Current has a fundamental obligation to deliver news programming with a progressive perspective that our viewers can count on being available daily — especially now, during the presidential election campaign. Current exists because our audience desires the kind of perspective, insight and commentary that is not easily found elsewhere in this time of big media consolidation.

As we move toward this summer’s political conventions and the general election in the fall, Current is making significant new additions to our broadcasts. We have just debuted six hours of new programming each weekday with Bill Press (“Full Court Press, at 6 am ET/3 am PT) and Stephanie Miller (“Talking Liberally,” at 9 am ET/6 pm PT).

We’re very excited to announce that beginning tonight, former New York Governor Eliot Spitzer will host “Viewpoint with Eliot Spitzer,” at 8 pm ET/5 pm PT. Eliot is a veteran public servant and an astute observer of the issues of the day. He has important opinions and insights and he relishes the kind of constructive discourse that our viewers will appreciate this election year. We are confident that our viewers will be able to count on Governor Spitzer to deliver critical information on a daily basis.

All of these additions to Current’s lineup are aimed at achieving one simple goal — thegoal that has always been central to Current’s mission: To tell stories no one else will tell, to speak truth to power, and to influence the conversation of democracy on behalf of those whose voice is too seldom heard. We, and everyone at Current, want to thank our viewers for their continued steadfast support.