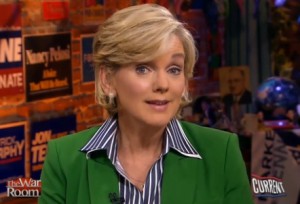 Next Wednesday’s first presidential debate marks Republican presidential candidate Mitt Romney‘s best, if not last, chance to get back into a presidential race that’s slipping away from him like a 2-hour-and-change Paul Ryan marathon. While both sides are doing their best at managing expectations, former Michigan Governor and current Current TV host Jennifer Granholm predicts that President Obama will straight-up lose that first debate. While this is no time to go all Joe Namath on Romney, however, the President has advantages that no amount of debate prep can buy.

Gov. Granholm threw a big wet blanket on the recent good polling news for the President, explaining, “Here is why we cannot celebrate. The President is going to lose the first debate next week. He will lose it. Mark my words.”

Luckily, he’s already got this thing sewn up, though, right?

After playing a clip from a 2008 primary debate that featured then-Sen. Obama struggling to answer over some heckling loudmouth in the audience (Bill Clinton, maybe?), Gov. Granholm declared, “He is a great president. He is a great orator. But he’s just not a great debater.”

“Mitt Romney, by contrast, he’s just in practice,” she continued. “Remember he won 16 out of 20 debates in the primaries. Now granted his opponents were all occupants of the clown-car but still, his debating experience is still fresh, he’s in shape. He’s effective in making strategic points, plus Romney has more to lose. And he knows he has to change the race dynamics. And believe me, make no mistake he is practicing 20 ways to do that. And while the president is on his way to the debate camp in Nevada starting Sunday, he’s already cancelled some of his debate prep because of events in the Middle East. That cancellation should worry you!”

“The second reason, a very important one, that the President is going to lose the first debate on Tuesday,” she continued, “is because the media cannot stand a lopsided race. The media needs a contest. If the debate is declared a wash, that’s a win for the President and the media is not going to let it happen.”

Governor Granholm went on to fairly beg the President to get to “debate camp” and practice up.

Much of what the Guv says is true, although she overstates the President’s supposed weakness at debates. One of the most frustrating parts of the 2008 campaign for Obama supporters, or even for other observers, was the complete and utter absence of debate fireworks from the then-Senator, but that wasn’t for a lack of skill (we know the guy knows how to argue), it was by design. As a reputedly good poker player, the President knew then, and knows now, that his biggest asset is his skill as a campaigner, and that there’s very little upside to pushing in huge stacks of chips on a debate, a risky proposition no matter your skill level. He’s got a big stack of political chips now, so he’ll sit back and let Mitt Romney fire at the pot all he wants.

Gov. Granholm is also right that Mitt Romney will be swinging for the fences at every pitch, but he’ll be swinging wildly. In those primary debates, Romney was the Obama, the slow and steady character who knew his best course of action was to let his desperate, mostly-batshit crazy opponents do each other in. This time, it is Romney who badly needs a win, which is much more likely to lead to the kinds of moments that stick in a bad way than anything else, especially if President Obama keeps his cool and doesn’t accept Romney’s challenge to a yacht race, or “47-percenter Skeet Shooting.”

Much of that dynamic will also depend on what the polls look like next week. If they’re steady or widening, look for Romney to break out the blindfold and the piñata stick.

But most importantly, President Obama will only be facing one opponent on that debate stage. Romney will have to contend, not only with the President, but with moderator Jim Lehrer, who will bring along Mitt Romney’s two biggest enemies: the facts, and a guy named Mitt Romney. On a wide range of issues, from health care, to immigration, to foreign policy, Mitt Romney will have to not only respond to the President, but to followups about his own Ghosts of Mitt-mas Past.

The media will play an important role in crafting the post-debate narrative, but on that stage, where it matters, Lehrer will be Romney’s biggest potential problem. If there’s anyone I hope is practicing up for this thing, it’s Jim Lehrer.

Here’s the video, from Current TV’s The War Room: