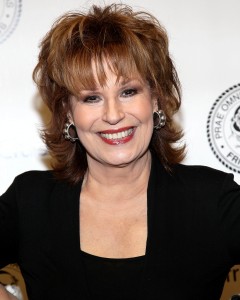 Hot on the heels of Current TV’s announcement that The View co-host and veteran standup comic Joy Behar would begin hosting an hourlong show for the network, the feisty Emmy® award winning talk show host sat down (or maybe stood up; it was a phoner, so who knows?) for an exclusive interview with Mediaite to talk about the new show, respond to hypothetical criticism, slam Mitt Romney‘s “idiotic” comments about public servants, and challenge conservatives to come on her show, “if they have the balls.”

As an observer of Current TV’s evolution, the announcement of Behar’s show was a bit of a surprise to me. The Joy Behar Show (which is only a working title; given her occasional propensity to work blue, I’d like to suggest The Joy F*ck! Club as a finalist) joins a lineup that includes liberal firebreather Cenk Uygur‘s The Young Turks, Eliot Spitzer‘s ad hoc Countdown replacement Viewpoint, former Michigan Gov. Jennifer Granholm‘s The War Room, and California Lt. Gov. Gavin Newsom‘s The Gavin Newsom show. While Behar is a politically engaged comedian, she’s not an obvious ingredient in the Current cocktail.

I asked Joy how she would respond to critics who might doubt her liberal street cred. “You know, I’m a comedian the same as Bill Maher and Jon Stewart,” Behar replied. “We all came up the same way. The three of us have interest in politics; I call us fundits, we’re fundits! We’re not pundits!”

“I don’t profess to be an expert on anything, or have the memory for who ran in 1952,” she continued, adding “I am an informed American citizen, that’s my position. I read the New York Times, I read The Nation, I read Newsweek, I read Time Magazine, I read Politico, I read Mediaite. This is what I do! I read every day, I have interests, I’m like everybody out there who’s watching, who’s out there watching, you know? So yeah, let them say that if they want.”

While Joy Behar doesn’t have the policical chops of Current’s Governor’s Row Plus Cenk lineup, she has the potential to bridge political and popular culture in a way that’s well-suited to the new media environment. Brash and provocative, Joy Behar plus any politician is a potential recipe for viral success. “I want to make it funny and entertaining so people will listen and watch,” she told me, “because I know that if you make it funny they’ll listen.”

In the first half of our interview, Joy talked a lot about balls (some of them hers), gave her wish-list of guests for the new show (including conservatives S.E. Cupp and Ann Coulter), and had some sharP words for Republican presidential candidate Mitt Romney. You can get a taste of Joy when she fills in for Eliot Spitzer next week, Mon.-Fri. at 8 pm:

NEXT: Transcript: (questions are paraphrased)

Tommy Christopher: Describe/talk about the show. What do you want to do with it?

Joy Behar: Okay sure. We’re gonna have a lot of [inaudible], I think. You know, different people. If you’ve ever watched my other show on HLN, you’ll see that it’s a similar format because I’m comfortable with that kind of format. You know, I like to have great conversations. I like to have one-on-one interviews with really, really smart, outspoken, uninhibited people who will tell you what’s on their mind without fear of consequence, people who will, you know, don’t have anything to lose in terms of, “If I open my mouth, they’re gonna get me.”

You know that type of conversation, I love that. I’m thinking people like Barney Frank, for example, because he’s a political person who also funny and I enjoy his interviews a lot. I like Alan Grayson, he was the guy who basically, you know, went after the right-wing with a vengeance. You know, this is a progressive channel, it’s owned by Al Gore and Joel Hyatt.

And you know, one of the things I’ve been saying, and I really mean this: I am angry that Al Gore did not win that year 2000. Now that has to be an absolute shameful day in America, when the Supreme Court decides who’s going to be President of the United States. And now they’ve come out with this Citizens United thing? It’s an outrage! If this continues, we will be on the worst track in this country, and I’m worried about it, frankly, I really am worried about the country. I feel that we’ve lost what Thomas Jefferson and the rest of these guys intended, and we’re losing it more rapidly than ever. So I want to be part of that conversation, and I feel that Current is the channel pour moi! I want to make it funny and entertaining so people will listen and watch, because I know that if you make it funny they’ll listen.

TC: What do you say to people who say you haven’t got the political or liberal street cred for a show like this?

JB: Oh yes, I know that people do say that. You know, I’m a comedian the same as Bill Maher and Jon Stewart. We all came up the same way. The three of us have interest in politics; I call us fundits, we’re fundits! We’re not pundits! You know, I don’t profess to be an expert on anything or have the memory for who ran in 1952. At least that’s for the political table, then we’ll be on the shelf to talk about that. I am an informed American citizen, that’s my position. I read the New York Times, I read the Nation, I read Newsweek, I read Time Magazine, I read Politico, I read Mediaite. This is what I do! I read every day, I have interests, I’m like everybody out there who’s watching, who’s out there watching, you know? So yeah, let them say that if they want.

TC: Do you know who the President of Ubeki-beki-stan stan is?

JB: No! [laughs] Why don’t you go ask Sarah Palin and see if she knows?

TC: Do you plan on having any conservatives on your show?

JB: I will. If they have the balls to come on the show. I don’t mean to overuse the word balls, especially when I’m speaking to you and your gorgeous jacket. But, if they have the chutzpah to come on my show then I’d be happy to talk to them. I’m very interested to hear both sides of the story. I used to have great conversations with Ann Coulter, really funny, crazy conversations, and you know, I look forward to that sort of thing. She can come on as well for me, and I’m sure she’d love to come on!

TC: Wishlist: 5 people you most want to have on your show.

JB: Besides you? Um, dead or alive?

TC: Either one. We can get some air fresheners.

JB: I’d love to have President Obama on, number one, he knows I’m a big fan. I don’t expect him to come on because he’s a busy man. I’d love to have Joe Biden, I love Joe Biden very much. Um, I’d love to have Abraham Lincoln on, I think he’d have a lot to say. Let’s see, Gandhi, Jesus, Joan of Arc [laughs], you asked me to name dead people and live people. In the living quarter, though, I’d like to have Marty Frank, Ellen Barkin, and Jane Fonda, Al Frankin, Senator Al Frankin I’d love to have him on. See, he’s a perfect example of someone who started out as a comedian, look where he ended up!

Conservatives? I have you the names of S.E. Cupp, Ann Coulter, uh who else? Give me some names, and Ill tell ya, I can’t remember them all!

TC: You guys tried to book him on the View?

JB: Of course I’ve been trying to book him!

TC: What would you ask Romney?

JB: I would ask him plenty of questions. Is he planning to endorse the Ryan budget? And I think that would be a terrible mistake. I don’t want to see people begging on the streets for food, thank you. And why does he hate Planned Parenthood? He never used to hate Planned Parenthood! I want to ask him about all the flip-flopping he’s been doing. That’s why he doesn’t want to come on, because he’s afraid of the questions.

TC: What do you think about what he said about “teachers, firemen, and police?”

JB: What did he say? Tell me what he said.

TC: He mocked the President for wanting to hire more teachers, police, and firemen, and said “Didn’t he get the message of Wisconsin that people don’t want more big government?

JB: That’s an idiotic statement! Can I just say that?

JB: I mean, I’d like to see his house burn, one of his million houses burning down, who is he going to call, the Mormon fire patrol?

TC: Is that a thing?

JB: You know what I mean? Come on! What am I supposed to do if my apartment gets caught on fire? Am I gonna call Mitt Romney to come and put it out? See what I mean? Now you hit on why I have to have a show, because these statements are so ridiculous and they sound so stupid to the average American person. I would like the American people to start thinking, we have to start thinking as we go towards November. These ridiculous…Now you have me a headache!

This post has been updated to correct a transcription error.