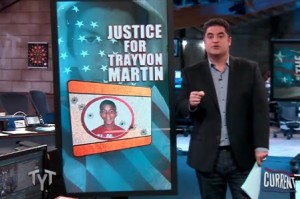 Although not regulated by the FCC, basic cable news channels generally adhere to the same language standards as their broadcast counterparts, with occasional exceptions. Current TV’s The Young Turks made such an exception Tuesday night, airing uncensored audio of the 911 call that many are convinced features George Zimmerman muttering “f**king c**ns” minutes before he shot and killed Trayvon Martin. The Young Turks‘ Cenk Uygur explained the decision to Mediaite.

Uygur stablemate Keith Olbermann has already flouted traditional broadcast standards a number of times, but in a very different way, moving “asshole” into the rotation of things he called people in his now-defunct “Worst Persons” segment. Call it one of the advantages of being on an upstart network.

But in this case, the airing of the clearly audible expletive “fucking” was in service to a more noble goal. I asked Cenk to explain the thought process. Here’s his response:(via email)

We had a long discussion about whether to run it unedited. Ultimately, we thought the newsworthiness of it mattered more than the fact that it was a profanity. You couldn’t hear it fully if it was partly bleeped. We listened to it dozens of times to make sure we were presenting it in a way that our audience was going to get the most clarity on it. The racial insult on the call could be pivotal to the case, especially on the issue of whether the federal government gets involved. The bottom line is that we are here to serve the audience and bring them the full context of the news.

It appears other outlets are bleeping it, which I obviously disagree with. I don’t think you have to be gratuitous about how many times you play it and we only ran it unedited once on the TV show, but I don’t think it’s right to leave the audience out of the loop on hearing the tape for themselves.

While the channel’s many detractors deride them for their still-growing audience numbers, Current TV has a huge advantage with younger viewers (especially The Young Turks, according to sources at the network), which in turn means that testing the fence on language standards carries less risk. The value of such latitude is debatable when it comes to getting to call people you don’t like “asshole” (although I’m all for the skilled use of all words, “profane” or not), but in the context of a news story, I believe it is an absolute good.

There’s a certain logic to keeping the evening news free of profanity, but even then, a content warning with a sufficient interval should be enough to clear the room of any 9 year-old news junkies. If harsh language plays a pivotal role in a news story, there ought to be a compelling news interest in censoring it, as well. The delicate sensibilities of some viewers is not only insufficient, it’s counter to the goal: censoring this tape, for example, blunts the impact that it will have especially on people who find such language distasteful.