D-Day Interpretive Dance Caps Off Month of Disrespect for Vets 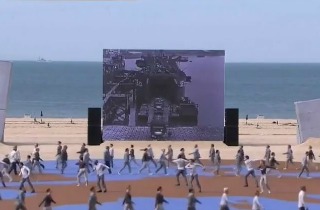 If you weren’t sure that the Western world’s supposed admiration for the sacrifices of military veterans was just lip service, you were privy to a rather definitive confirmation of that fact in the past four weeks.

A month which debuted with the exposure of the system-wide effort to deny veterans medical care built to a climax with the White House erecting a conveniently epic fiction around an alleged deserter. When that soldier’s platoon-mates objected to their commander-in-chief insisting this man who shirked his duty was a hero, they saw their characters maligned and integrity attacked. But the drama’s denouement was reached on Friday when, celebrating the 70th anniversary of the invasion of Normandy, we commemorated the sacrifice of tens of thousands with a belittling dance.

The national disgrace involving the Veterans Affairs administration hiding the true waiting times that vets faced has not, in fact, been resolved simply because the president finally relented to mounting bipartisan political pressure and jettisoned his VA secretary. You would never know that from this White House, which has treated the VA scandal from minute one as a political crisis rather than the dishonor that it is.

On Thursday, acting VA Sec. Sloan Gibson confirmed that the deaths of another 18 veterans can be linked to his department’s failure to provide care to those on unacceptably long waiting lists. That admission brings the death toll to 35. VA facilities in 19 states are under investigation and there is no end in sight to the parade of whistleblowers emerging from the woodwork to denounce a culture of callous indifference at the VA. Congress has taken the lead on crafting emergency reforms to that fatally flawed government health care system. The White House is, somewhat understandably, distracted.

Only the most credulous have not linked President Barack Obama’s announcement of the swap of five Taliban commanders for Sgt. Bowe Bergdahl, just hours after he announced the resignation of his VA secretary, to the president’s political problems. He needed to get the VA scandal off A1, and he accomplished that. But the remedy has been, in many ways, worse than the ailment.

Originally described as a noble solider who served with “honor and distinction,” the White House found itself on the defensive when the public learned that the opposite was likely true. Appalled by the revisionist history trumpeted by the president and his advisors, a number of Bergdahl’s fellow soldiers offered to correct the record. The president’s allies rewarded their service by attacking their character and credibility.

“I’ve had a few aides describe it to me as ‘we didn’t know that they were going to Swift Boat Bergdahl,’” NBC’s Chuck Todd reported, in a reference to what Democrats regard as a coordinated smear campaign against John Kerry.

“What if his platoon was long on psychopaths and short on leadership?” asked Brian Friedman, Obama’s deputy assistant secretary for public affairs at the Department of Housing and Urban Development.

“Nobody knows exactly what happened that night,” State Department spokeswoman Marie Harf said when asked about the details of Bergdahl’s alleged desertion.

“Well, I think that his squad-mates would have the best indication,” Fox News reporter Lucas Tomlinson suggested.

“I don’t think that that’s the case,” Harf replied.

Even the president’s allies in the media have taken to shaming these apolitical soldiers for correcting the record and embarrassing the White House in the process. “Did Sergeant Bergdahl desert the Army or did the Army desert him?” asked an inquisitive post published in Think Progress. You can guess the answer.

But the final act in this disgraceful production commenced on Friday when a number of world leaders gathered on the beaches of France to commemorate the 70th anniversary of the beginning of the end of World War II. There, the blood of tens of thousands of young Allied men was remembered in interpretive dance.

Reminiscent of Olympic opening ceremonies, hundreds of performers descended on the beach where they gesticulated and gyrated in fashions supposedly evocative of the struggles endured by those soldiers who slogged across the battlefields of Europe. Playing the role of Meredith Vieira was NBC’s Todd, who helpfully explained to the audience that this or the other spasmodic display was actually representative of the 1943 invasion of Sicily or the French resistance movement. Who’d have guessed?

The program culminated with troops of young men in olive drab fatigues walking in slow motion into what was presumably an imaginary hail of machinegun fire encountered as they disembarked from imaginary landing craft. 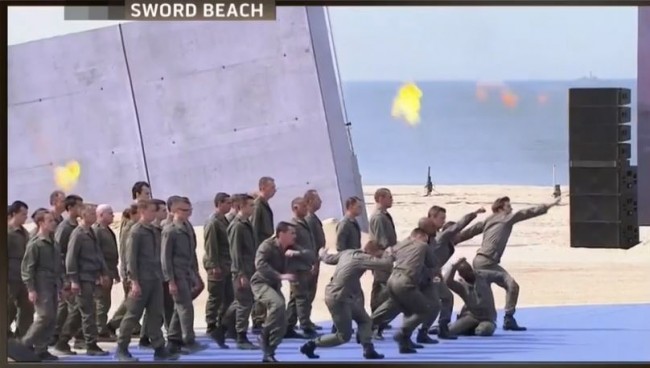 It was a symbolic display, alright. But the performance did not symbolize what those who conceived of it had wished. Instead of a solemn and contemplative remembrance of the costs paid in order to leave ensuing generations a free world, viewers were made to witness a display of cleverness.

In fact, we have been witnessing cleverness all month. How cleverly can the White House extricate itself from the political peril of the VA scandal? How cleverly can Obama’s allies reframe the national debate around Bergdahl? What a clever exhibition we witnessed on the beaches of Normandy. It’s all rather unseemly and symptomatic of the self-obsession with which the second post-War generation struggles.

Maybe the third generation will learn from these graceless spectacles and embark on a return to contrition and sobriety. Maybe we will look back on the political pageantry that suffices for respect for veterans and see it as gauche.

Or maybe we will just hike the pyrotechnics budget.