Daily Caller Scribe: Keeping Troops Out Of ‘Harm’s Way’ A ‘Strange Way To Fight A War’ 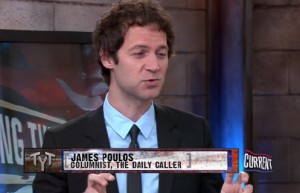 During a panel discussion of Jeremy Scahill‘s accusation of murder against President Obama, The Young Turks Power Panelist™ and Daily Caller columnist James Poulos (he of the quest for what women are for) made an interesting point about the use of drone strikes to kill suspected terrorists, and he made it in an interesting way. Host Cenk Uygur led the panel in discussing Scahill’s contention that drone strikes which kill civilians amount to murder, but Poulos challenged a near-untouchable premise about the strikes, and he did it with air quotes.

First, Cenk played a clip of Jeremy Scahill’s appearance on MSNBC’s Up with Chris Hayes this past weekend (Cenk’s a fan), then tossed the question to The American Prospect‘s Paul Waldman. “Those are really strong words,” Cenk said. “Paul Waldman, you’re a progressive. What do you think of Jeremy’s point there?”

Waldman summed up the issue pretty well, saying that “we shouldn’t make the mistake of thinking that the technology necessarily gives us an entirely different set of moral questions. You know, if its wrong to kill civilians, it’s wrong to do it when you do it from the air, from an unmanned aircraft or from a manned aircraft. Whether you do it on the ground with bullets. The moral calculation is the same, even if it allows our leaders to feel like they are removed from it.”

Cenk then asked the panel, “Can we get an agreement here across the political spectrum that if its an American citizen we should at least indict them in court before we execute them?”

Here’s where I think Cenk ought to extend Waldman’s logic a bit. Whether you agree with them or not is a separate issue, but the premise of the drone strikes is that these are people who pose a foreign threat to the United States, and need to be killed. If that’s true, their citizenship status shouldn’t be a huge issue, and if it’s not true, then we shouldn’t be killing them even if they’re not US citizens. The right not to be killed unjustly is, in my view, a human right.

Poulos’ reply, though, contained a challenge to one of the more attractive things about drone strikes, the elimination of US casualties. “I don’t know if we’re going to get that agreement,” he said. “I’d like to see that agreement. I think it would be a nice thing to do at a minimum, and perhaps even a constitutionally necessary thing to do.”

“But given the fact that we want to fight wars on the cheap,” Poulos continued, “we want to keep people out of ‘harm’s way’ (using finger-quotes) if they’re wearing an American uniform — it’s sort of a strange way to fight a war — it’s understandable in its way, but it’s something that I think people are ready to lose the thread on and let it go where it goes, unfortunately.”

The use of drones to eliminate US casualties is usually seen as an unquestioned good, but Poulos appears to be arguing that it also desensitizes us to the human cost, and perhaps makes it too easy for us to look away from what’s being done in our names. The finger-quotes appear to be an underscoring of the absurdity of a “harm-free war.”

It’s an interesting point, to be sure, but the alternatives are putting soldiers back in harm’s way instead of using drones, or only using drones to kill other robots, neither of which are likely to occur anytime soon.

Cenk concluded the segment by asking, “Paul, at least indict American citizens before we execute them? Can I get that much?”

Waldman agreed, and noted that the American people have been conditioned to believe in the guilt of so-called terror suspects. ” That’s one of the legacies of the September 11th attacks, is that we’ve extended the battlefield to cover the entire planet. And now, anywhere where we find somebody who we don’t like, that person can be called a bad guy and then the American public will say, ‘Yeah, sure. Go ahead — it doesn’t matter if he’s an American citizen. You can go ahead and kill him.’ And, you know, its one thing when you’re talking about somebody who is most certainly involved in terrorism, like, I don’t know, Anwar al-Awlaki, but then, what if that next president decides, ‘Well, you know, there’s some American ex-pat who’s living in Amsterdam and organizing an anti-American rally. Maybe we’ll send a drone to go kill him.'”

Cenk renewed his frequent criticism of President Obama. “I’ll go one step further,” he said. “I’m not worried about future presidents, I’m worried about *this* president, okay? Yes, I also care deeply about what future presidents might do, but I don’t trust our government. I know that’s a sacrilegious thing on television, but I don’t trust them,” citing the killings of Anwar al-Awlaki and his 16 year old son without due process.

Update: Jeremy Scahill points out that in his Up with Chris Hayes appearance, he was referring specifically to a Dec. 17, 2009 cruise missile attack on al Majalah, not a drone strike:

Just a point of clarification. If you actually listen to what I was saying on “Up With Chris,” I was discussing two specific cases. One, was the December 17, 2009 cruise missile strike on the Yemeni village of al Majala. I investigated that strike on the ground in Yemen, and did a 30 minute documentary on it for al Jazeera. It was the first strike Obama authorized on Yemen. The vast majority of the victims–35 in all–were women and children. The US used horrendous cluster bombs in that attack, which shred human beings into ground meat. Unexploded bombs killed more people a few days after the strike. That was not a drone strike. The other issue I discussed was the so-called “Signature Strikes.” The idea that you target people based on the fact that they are “military aged males” or patterns of travel or geography is extremely dubious and will undoubtedly result in innocent people being intentionally targeted. To me, drones are not the prime issue we should be debating; the kill program is the issue. Whether it is Tomahawk cruise missiles fired from the ocean, Hellfires fired from drones, or AC-130s firing on people is, in many ways, a side issue. Those are the vehicles for implementing a policy.