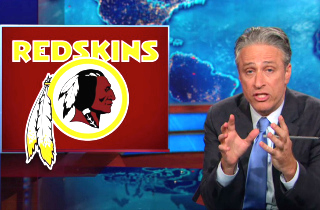 Some Washington Redskins fans are upset with The Daily Show after the Comedy Central show invited them on to defend the team’s monicker, only to ambush them with Native American activists who’d confront them about the hurtful nickname.

The Redskins Nation citizens eagerly signed up, most of them knowing that they might be mocked in their interview with correspondent Jason Jones. But several hours into the Sept. 13 taping of the yet-to-air episode, the fans, all from Virginia, said they were suddenly confronted by a larger group of Native American activists — all of whom were in on the showdown prearranged by “The Daily Show.”

The encounter at a Dupont Circle hotel was so tense that an Alexandria fan said she left in tears and felt so threatened that she later called the police. She has told “The Daily Show” to leave her out of the segment but doesn’t know whether the producers will comply.

“I felt in danger. I didn’t consent to that,” said that woman, Kelli O’Dell, 56. “I am going to be defamed.” Another participant claims a Daily Show producer reassured in advance that there would be no “cross-panel discussion.”

According to the participants, when the Native American activists entered the room, and Daily Show correspondent Jason Jones pulled out beer and chicken to watch from the sidelines, “the room first filled with awkward silence, then vitriol.”

The activists included Amanda Blackhorse, the lead plaintiff in a case against the team’s name, and comedian Thomas Ryan Red Corn, who later posted a picture of himself with colleagues and Jones:

Time reports that the Native Americans also took some abuse in the parking lot of the Redskins’ FedEx Field:

The Native Americans took flak as they were being filmed for The Daily Show at the FedEx Field on Sunday, where Redskins fans tailgating an NFL season opener shouted obscenities at them. According to one of the Native Americans, one man shouted at them “Thanks a lot for letting us use your name, boys!”