Daily Show Conducts ‘Conversation About Race’: ‘No One’s Forcing Bill O’Reilly To Be An Asshole’ 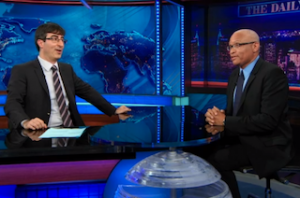 With “conversations about race” dominating cable news since President Obama delivered his landmark speech on race and the Trayvon Martin case, it was only a matter of time before The Daily Show‘s “Senior Black Correspondent” Larry Wilmore entered the fray. Last night, he sat down with John Oliver for a serious conversation about the problems facing America.

“Fuck you, Oliver,” Wilmore began. When the host questioned whether that was a productive way to start, Wilmore pointed out, “that’s how everyone has a conversation about race.” He then showed a montage of increasingly inflammatory cable news segment, ending with Bill O’Reilly’s Monday night “Talking Points Memo,” in which the Fox host declared, “White people don’t force black people to have babies out of wedlock.”

“True,” Wilmore said to that point, “just like no one’s forcing Bill O’Reilly to be such an asshole.” He continued, saying “the point is, white people and black people view the racial problem in totally different ways” and citing Mediaite’s recent article about a NBC News/Wall Street Journal poll as evidence. As Wilmore put it, “a majority of whites see America as colorblind, whereas the majority of blacks see white people as crazy.”

Asked by Oliver whether he thinks the George Zimmerman verdict was about race, Wilmore said no. “The real outrage of the Trayvon Martin is that an adult shot and killed a child and there were no consequences. We don’t know for sure what made George Zimmerman shoot an unarmed teenager. Maybe it was the racism in his head, maybe it was the laws in his state. But it was definitely the gun in his hand.”