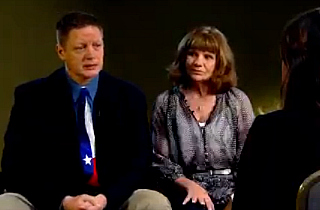 The Daily Show‘s Jessica Williams traveled to Texas this week to see how the people of that state are coping with President Obama‘s second term. While she may not have found a representative sample of Texans, she did come across a handful of citizens fighting against the “tyranny” of the federal government and holding out for the day Texas can secede from the Union once and for all.

Williams first met with Larry Kilborn and Lynn Troxel who say the United States government is a “tyrant” and listed things like being able to text and drive as “freedoms” that fundamentally separate the Texan way of life from the rest of America. Williams countered by asking them, “What does the word ‘tyrant’ mean to you as opposed to what it means to everybody else?”

Next, Williams moved on to visit Bob Wilson of Arlington, Texas, who says Texas can’t secede from the United States, “because Texas never ceded anything to the United States.” As proof, Wilson showed Williams some mail-order documents, which were “both officially detailed and extremely well laminated,” and appeared to show that Texas never joined the Union in the first place. In Wilson’s mind, this made his home a foreign land, subject to his own Libertarian laws.

So, Williams rounded up Kilborn and Troxel, along with two other guys they were able to find, and the five of them boarded a Mayflower truck headed for Wilson’s house on a Pilgrim-esque journey to a freer land. Williams concluded her report by saying, “As they settled in for what I can only imagined was a joyous first Thanksgiving, I suddenly knew the relief the British must have felt 400 years ago when these guys finally fucking left.”