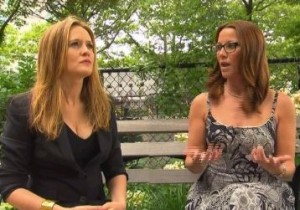 Sarah Jessica Parker hosted a fundraiser for President Obama recently, spurring lots of chatter about the president’s mingling with Hollywood and the role of money in campaigns. Is this appropriate in troubled times? To investigate, The Daily Show enlisted Samantha Bee in an episode of Sam and the City — featuring commentators/columnists S.E. Cupp and Ari Melber.

Upon receiving Parker’s invitation, Bee realized she didn’t know how she felt after four years. She pondered, “Should I go to the party or not?” For advice, she turned to some friends, first chatting with Melber over a couple of cosmos. Melber helpfully reminded Bee of Obama’s talking points: after all, he’s “been trying to meet the needs in the economy where they’ve added or saved at least four million jobs” — and passed health care reform.

Still confused, she turned to her token black friend to discuss that other guy in Massachusetts, before awkwardly realizing that, well, there were no black friends. Finally, Bee decided, “my friend S.E. would know what to do. She always gives me such good advice.”

Not disappointing, Cupp said it looks bad “to throw this fundraiser and hobnob with Hollywood celebrities when we still have 8.2 percent unemployment.” As Cupp continued, an exasperated Bee remembered “sometimes she gives too much advice,” and “never had a good thing to say about him anyway.”

But turns out all the advice was to no avail. Bee “wasn’t quite actually directly invited.” After all, she didn’t have what Obama needs right now: “powerful friends and an enormous and available line of credit.”