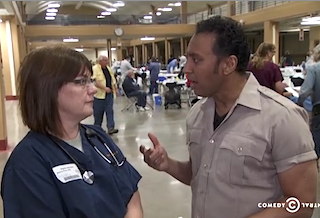 You hear it a lot from opponents of the Affordable Care Act: America already has the “best health care system in the world.” On last night’s episode of The Daily Show, Aasif Mandvi set out to dispel this myth once and for all by visiting this country’s version of a “Third World country.”

Mandvi began by talking to NYSE Euronext Managing Director and occasional Fox Business guest Todd Wilemon, who argued that Obamacare will cause American health care to slip into “Third World status,” with less choice and longer lines for patients.

To see what that might be like, Mandvi traveled with Remote Area Medical’s Stan Brock to a place he thought might be Africa or South America, but turned out to be Knoxville, Tennessee. There, he learned that the United States is actually ranked 37th in the world when it comes to health care, right between Costa Rica and Slovenia. And he got a first hand look at why that is.

When Mandvi told Wilemon what he saw right here in America, he left the Obamacare opponent utterly speechless. All he could come up with was, “people do fall through the cracks.”

“From what I saw, those are some pretty big fucking cracks,” Mandvi said. “So the worst case scenario for Obamacare is that it gets up to a place where we already are?” And as for Wilemon’s solution for those who can’t afford health care,” Mandvi summed it up this way: “If you’re poor, just stop being poor.”