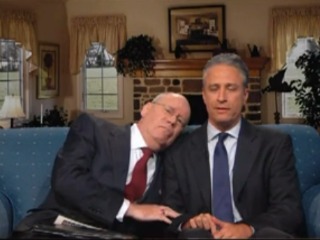 This evening on the Daily Show, Jon Stewart gently poked fun at Barack Obama‘s recent speech regarding taxes (“This is not class warfare. It’s math.”) by confirming that one can never go wrong appealing to Americans’ love of math.

Then, he poked slightly-than-gentle fun at Louisiana Sen. John Fleming‘s (R) recent comments about “only” having $600,000 with which to feed his family after taxes. And only $400,000 after feeding them! Those Flemings must be downright ravenous.

What sort of accountant, Stewart wondered, would have advised Fleming — who owns a chain of Subway restaurants — to pay income tax on money he would be reinvesting into his business, as he had claimed? Not to mention that $200,000 equates to 400,000 feet of Subway sandwich! (With extra banana peppers at no extra charge, thank goodness.) Plus, he asked, do we really need more Subways? (Yes?)

And, of course, Stewart wouldn’t be doing his job if he didn’t comment on Bill O’Reilly‘s recent threat to leave his Fox News show if taxes are raised. He seemed crushed, truly, particularly because O’Reilly is merely looking out for a dying breed — the reclusive and elusive United States millionaire.

Fortunately, Stewart & Co. have put together a charity aimed at helping millionaires. They even prepared a PSA for it, complete with the soulful crooning of one Sarah McLachlan, whose work with the ASPCA has, personally, given me the Pavlovian response of immediately bursting into tears every time her music is played.

Watch the segments, from Comedy Central: