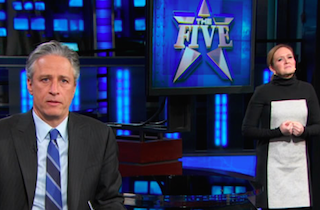 When Fox News’ Dana Perino stopped by The Daily Show last week, she had the pleasure of meeting one of her most obsessive fans: Zhubin Parang, the writer behind Samantha Bee‘s epic one-woman show about The Five that aired last January. With Bee’s final show as a correspondent airing tonight, she and Parang came together on The Daily Show podcast to discuss what is perhaps their greatest creation.

While Bee had to pretend to love The Five in her piece, Parang admitted that she was essentially playing him in the sketch. “I won’t hide that,” he said, adding that his “unhealthy obsession” has been there since the show debuted in 2011. Parang would have it on in the background as he did work towards the end of the day and “something about them, their chemistry, their grasp on the issues” just grabbed him.

He went on to say it was a “dream come true” in a “weird and horrible way” to meet Perino last week and admitted, as Stewart revealed that he fantasizes about various way he and Andrea Tantaros could “meet cute.” (Sorry, Parang, but apparently she’s dating Dave Navarro now.)

“I honored you and your creepy obsession,” Bee told Parang.

Listen to the clip below, via The Daily Show podcast:

Watch Samantha Bee’s tribute to The Five below, via Comedy Central:

Listen to the full Daily Show podcast episode at thedailyshow.cc.com.