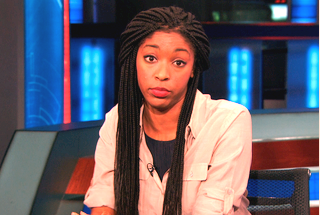 Jessica Williams, number five on our list of Daily Show correspondents most-likely to take over The Colbert Report’s time slot when Stephen Colbert departs for CBS, is saying that role is not for her. Williams responded to a Change.org petition calling for Comedy Central to give her the gig with an open letter to her fans on Tumblr.

After thanking everyone who signed the petition, Williams wrote, “I’m sure Comedy Central already has something dope in the works to take that particular spot… after the Daily Show. I’m sure it will be great and funny and wonderful! I can’t wait to see what it is.”

Read the full note below:

There’s a change.org petition going around that is asking for Comedy Central to give me my own spot after The Daily Show! People keep bringing it up to me and it’s like, a strange thing to ignore (for the sole purpose of being politically correct). SO I want to like, take a moment and say thank you to those that created it and signed it. That is unbelievably nice of you. And I am so very very honored to like, even be a person that some people would consider a candidate to slip into that 11:30 spot. (sounds like sex!)

That being said, I’m sure Comedy Central already has something dope in the works to take that particular spot (teehee sex again!) after the Daily Show. I’m sure it will be great and funny and wonderful! I can’t wait to see what it is.

BUT whatever happens with that slot, just know that I appreciate your support. Also know that right now I am in the middle of creating and working on some VERY dope things. Not necessarily the exact way that you lovelies have envisioned it, maybe something, dare I say it- ESPECIALLY & MAGNIFICENTLY DOPER. Y’all shall see soon, ya hear?!

In other Williams-related news, the comedian recently sat down for a hilarious interview with her fellow Daily Show correspondent Jason Jones to talk about her role as the show’s token… tall performer.

Watch video below, via Comedy Central