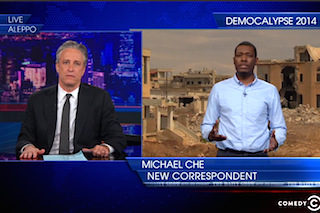 Stand-up comedian and former Saturday Night Live writer Michael Che made his debut as a correspondent for The Daily Show last night, and it appeared that he may not have gotten the memo that he was reporting the news for a comedy show. Surprisingly, Jon Stewart was thrilled that someone on his team finally has someone who “understands the complexities of the Syrian conflict.”

In a live shot “from Syria,” Che delivered the following, devastating monologue:

“Standing here in the ruins of the once-proud city of Aleppo makes it painfully clear that the future of Syria will not be decided at the ballot box. The only question the Syrian people are concerned about is if their towns will be overrun by Assad’s murderous forces or by rebel militants, whether they be al-Nusra or the Islamic Front. Therein lies the bitter irony of this so-called free and fair election. It’s guns and shells that hold the real power here.”

“You like that, Jon?” Che asked when he was done. “First day. Nailed it! I Edward R. Murdered this shit!”

One person who was not happy about the whole thing was Aasif Mandvi, who interrupted his hiatus from the show to crash Che’s segment and ask, “What the fuck is going on here?”

Mandvi said he was protecting his Muslim turf and proceeded to break out the big guns with jokes like, “Bashar al-Assad, more like Bashar al-a-Sucks!”