Dallas Police Chief: Gunman Wanted to ‘Make Us Pay’ For Racial Injustice, Had Plans for Other Attacks
video

Dallas Police Chief: Gunman Wanted to ‘Make Us Pay’ For Racial Injustice, Had Plans for Other Attacks 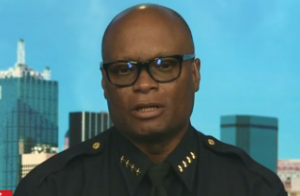 Brown appeared today on CNN’s State of the Union, where he told Jake Tapper about what it was like to engage Micah Xavier Johnson on the night he killed five cops and wounded seven others. The chief said that Johnson taunted cops, sang about his deeds, and demanded a Black negotiator during his two-hour standoff with cops before being killed by a remote-operated police bomb.

Brown said that investigators are still trying to make sense of the evidence found in Johnson’s home in Mesquite, though he said that they have discovered bomb-making materials, a personal arsenal, and a journal of combat tactics. Brown said Johnson’s writings suggest that he had plans for violence that went beyond Dallas.

“We’re convinced that this suspect had other plans and thought that what he was doing was righteous and believed that he was going to target law enforcement — make us pay for what he sees as law enforcement’s efforts to punish people of color.”

Brown said the investigation into Johnson is still trying to figure out what the initials might have been referring to.