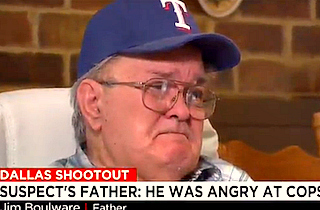 Jim Boulware, father of the man believed to have shot at Dallas police yesterday, told CNN Sunday his son had reached a “breaking point” after losing custody of his son, and had likely devised his attack as a protest.

James Boulware was fatally shot by a police sniper after an overnight standoff that began when he opened fire on a Dallas police station. Boulware was later cornered in a parking lot; his van was lined with explosives and had to be detonated by a police bomb robot. No officers were injured after what the department described as “literally dodging bullets.”

“He was trying to make a statement to get the system to understand he had lost his son, and it cost him his life,” his father said Sunday, through tears. Boulware denied that his son was a “domestic terrorist,” but was not so certain about his sanity. “When you reach that breaking point, I don’t know what you call sane or insane anymore.”

“I knew he was angry with the police, he blamed them for taking his son,” Boulware said. “I tried to tell him the police didn’t do it, they were doing their job, to enforce the laws. If you want to get to that, you gotta go back to the liberal people that put these laws in place, to where the [authorities] can grab kids and take them away.”

When asked by a CNN host why he didn’t get some help, Boulware replied, “Where? Where does a white male get help?”