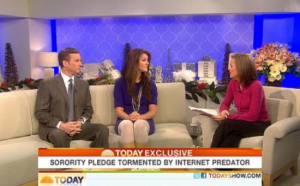 This morning, Dan Abrams, Mediaite’s founder and NBC’s Chief Legal Analyst, went on Today to discuss a disturbing story that’s been affecting a number of colleges in the south east. Some person or persons have been messaging freshmen girls pretending to be affiliated with a sorority they’re pledging. The perpetrator has long conversations with the girls, getting their personal information all for the sake of the sorority and “sisterhood,” before moving onto sexual requests (nude photos and the like) and, finally, violent threats. One of the most disturbing elements is that campus and local police currently have no leads in the case.

The story was given by one of the many victims who was on hand to tell of how she was tricked and threatened before she finally went to the authorities. They told her it had happened to eight other girls on campus but that they had no idea who was committing the crime. Meredith Vieira asked Abrams how this could be. he explained that, while this clearly fit the spectrum of illegal cyber stalking and harassment laws in Florida, the trick was finding the culprit. Normally, this would be done by finding the computers that were used to commit the crime, however, Facebook doesn’t keep track of this information. Abrams believes the authorities best bet will be the fact that the culprit knew so much about the way these sororities ran (times and locations of meetings, etc.). This would imply that they could be someone locally, perhaps who matriculates or is employed by one of the schools. Unfortunately, no one knows for sure.

Check out the segment from NBC below: