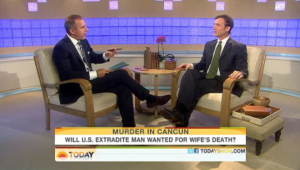 Five months ago, Monica Beresford-Redman’s body was discovered outside of the Cancun hotel where she had been staying with her husband and two children. Shortly after, Bruce Beresford-Redman, the husband and a producer of notable reality series including Survivor, was arrested for the crime by Mexican authorities. Before they could charge him, he returned to America and Mexico has been requesting his extradition for the past couple of months. On Today this morning, NBC’s Chief Legal Analyst and Mediaite founder Dan Abrams discussed how long that process could take.

“It could go on for months. I think it’s enormously frustrating to the people involved, I’m certain. But the reality is, first, the Mexican authorities had to sort of get their ducks in a row and put together the right document to say we want you to extradite him. The State Department then takes that and says, okay, we’re going to look at this. And then, very often, they go back. They don’t just look at a document and go yes or no. They’ll go back sometimes and say, wait, we need more of this, less of this, et cetera, et cetera. Then, if the State Department thinks there’s enough, then they take it effectively to the Justice Department where the defendant can have an opportunity to say ‘I shouldn’t be extradited at all.'”

All the while this is going on, the family of the victim will be waiting for closure to her death. Watch Abrams’ analysis as well as a rundown of the background of the case below: