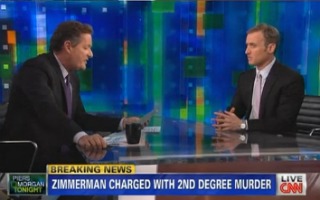 ABC legal analyst and Mediaite founder Dan Abrams visited Piers Morgan‘s CNN program Wednesday night, where he weighed in on the latest developments in the Trayvon Martin case. At this point, he explained, George Zimmerman‘s lawyer can ask for a hearing to “basically test out his defense, the ‘Stand Your Ground’ defense.”

Abrams found it notable that Special Prosecutor Angela Corey charged Zimmerman with second degre murder rather than manslaughter, as it means that his shooting Martin could not have possibly been a mistake. “When you’re talking about second degree murder,” he explained, “it can’t be an accident. You’re talking about a level of intent, depraved mind, action which is imminently dangerous. These are important legal phrases. But the end result is he’s facing now up to lif instead of just up to 15 years.”

Morgan turned things over to attorney Gloria Allred, who emphasized that it would be inappropriate for Corey or her colleagues to reveal evidence about their case to the public at this point.

Abrams also pointed out that a series of lesser charges could still be forthcoming based on forensic evidence as the case moves on. Eye and audio witnesses will also, he said, play an important role in determining the outcome of this case.

Allred was curious about what it is that Zimmerman has told family members and the Sanford police, and whether there have been any inconsistencies in his account of what happened the night he shot Martin.

As far as the “Stand Your Ground” law is concerned, Abrams explained that it wouldn’t apply to Zimmerman if he 1) was losing a fight that 2) he initiated. Thus, “Did Zimmerman confront Martin?” is the question that needs to be answered in terms of that particular defense. Allred added that Zimmerman may try to diffuse or disprove the idea that Zimmerman had followed or pursued Martin.