Dan Abrams: Mel Gibson Tapes May Not Have Been Recorded Legally 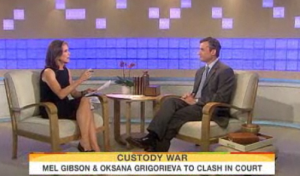 Now that the initial shock of the Mel Gibson tapes released by RadarOnline has worn away, much of the conversation has turned to whether or not they will be admissible in the bitter custody battle between Gibson and Oksana Grigorieva. However, Dan Abrams, NBC’s Chief Legal Analyst and Mediaite’s founder, appeared on the Today Show this morning to discuss another wrinkle in the case; the tapes may not have been recorded legally.

“California is a two party consent state, which means that, if she did make it and he didn’t know it was being made, which seems pretty clear, then she would have had to have believed that she was in imminent danger, that she was doing it to prevent violence to a child. She’d need a specific reason that she was making this tape without his consent to make it-to even avoid criminal liability. Then the question would be admissibility but I think, if she passes the first test, it likely would come in, certainly in a custody battle.”

The latest tape apparently features Grigorieva accusing Gibson of striking both her and her child which, if true, would certainly go a long way to settling the questions Abrams brings up. However, Gibson’s legal team will be trying to present the tapes as merely an attempt by Grigorieva to get more money and, as such, a form of extortion.

During the rest of the segment, Abrams and Meredith Vieira discussed other elements of the case and how they could affect it including the character testimony from Gibson’s ex-wife Robyn. Watch below.