Dan Abrams On CNN: Halperin Is A ‘Big Boy– He Could’ve Used Another Word’ 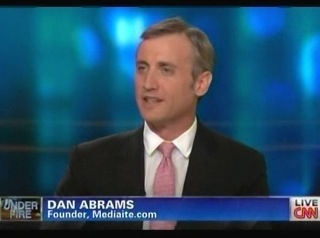 Mark Halperin received universal criticism today after calling President Obama “kind of a d*ck” on Morning Joe today, and so far has found little sympathy for his comments from the media. On tonight’s In the Arena host Eliot Spitzer discussed his suspension with Mediaite founder Dan Abrams, who had no problem with Halperin’s sentiment but objected to the language: “there’s another way to say it.”

“Did he jump or was he pushed?” Spitzer asked after playing the ~30 second clip of Halperin suggesting that the word he was about to use for President Obama required the seven-second delay, and hosts Joe Scarborough and Mika Brzezinski pushing him to say something controversial, without knowing what it was he was about to say. Abrams noted that “sure he’s being encouraged,” and that on a show like Morning Joe, “you want to be as provocative and interesting as possible.” That doesn’t justify, he argued, the harsh language used against the President– and especially the President. “If he called Joe Scarborough that word,” Abrams argued, “I don’t think it would’ve been that big of a deal.”

Spitzer expressed some hesitation at the immediacy of the suspension on freedom of speech grounds, noting that “we’re so hesitant” in expressing themselves on television and that stifling certain words because of the nature of them without the civility argument. Abrams disagreed with this tension– “when you’re on television, when you’re on a news network, what you say matters.” He added that “when you pick a word like that to talk about any President of the United States, you’re going to get yourself into trouble… It’s not about civility.”