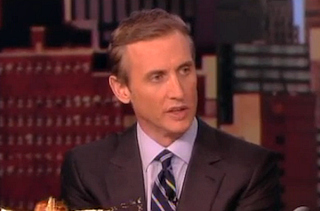 ABC Chief Legal Affairs Anchor and Mediaite founder Dan Abrams appeared on The View Monday morning to discuss the Zimmerman defense’s confidence heading into the second half of the trial, arguing that Zimmerman would likely be acquitted based on conflicting witness testimony.

“Things have gone very well for the defense,” Abrams said. “I would be very suprised if there was a conviction on either second-degree murder or manslaughter.”

Abrams gave an example of the contradictory testimonies he believes will create reasonable doubt in the minds of the jury: “One witness says George Zimmerman was the one on top. Another witness says it was Trayvon Martin on top. Right away, that’s advantage to Zimmerman. Why? Because the prosecution has the burden to prove the case beyond a reasonable doubt.”

Asked if Zimmerman will testify, Abrams said, “Not a chance he’ll take the stand. His statements have already come in. The prosecution tried to show that there were inconsistencies in statements that he made to the police. As a result, they introduced all of his statements, so from the defense perspective now, there’s no need to call him to the stand.”

RELATED: ABC’s Dan Abrams Explains Why Zimmerman Is Likely To Be Acquitted

Abrams received some push back from Whoopi Goldberg, who noted the delay between the shooting and the police bringing Zimmerman in. “Why didn’t they arrest him?” she asked.

“Because they didn’t think they had evidence,” Abrams said. “The same reason he probably won’t be convicted: self defense law.”

“Would this happen there was a reverse?” Goldberg asked. “If Trayvon had shot this man and killed him, would we be talking about it?”

“We probably wouldn’t be talking about it, but I think the outcome would probably be the same in terms of the verdict,” Abrams said.

Watch the exchange below, via ABC: